Life has changed dramatically in the last week and a half …

About two weeks ago my hun came home from work disturbed because one of the VNG guys had told him that his supervisor, Stan, was actively setting him up to be the fall guy for why everything on this job went wrong. I told him not to give this idea any attention, to focus his energy elsewhere and not worry, but as the days passed it did seem that something was up. People within the company stopped taking his calls or were distant and non-committal in their conversations. Some of these people were people he’d worked with and considered friends for the past 20 years. I just couldn’t believe or accept that Stan would be able to convince people that none of the wrongdoings on this job were his fault. But a week ago Tuesday, when the guys went in for the night shift, Stan fired Jay and John. Merry effing Christmas!

Stan kept saying it was VNG who ran them off the job (but then why couldn’t they just send them back to Atlanta to work?) and the VNG guys kept saying it was Stan who had laid all the blame on Jay with the company and that was the reason he got fired. The reality is we’ll never really know what happened. It’s a he said/ she said kind of thing. But I suspect the company just didn’t want to pay the bonuses and work has slowed down so they’re cutting staff.

That first night we made a big bonfire at Deb & Dana’s even though they weren’t there and despite it being well below zero temperatures. Me, Jay, Joey and John hung out pretty late while the guys let off steam. The next morning John left and went back to Georgia. Joey left that afternoon to go to Florida to see about getting somebody to come back with him to drive either the motorhome or his car home. It turned out Joey was not fired though, so he came back within a couple of days and got in a few more days work before he was laid off.

On Wednesday Jay went to the office to let Rose know the situation and find out how long the company had paid our lot rent up to. She came around Wednesday afternoon with an email from the company saying they’d pay through Sunday the 19th and then we were on our own. Rose said we were welcome to stay as long as we wanted and at first we decided we’d at least stay through the holidays. Wednesday was an anger filled day. More campfire ranting in the cold. A lot of heavy drinking. Then Thursday depression set in, which was pretty terrible. I didn’t sleep a wink for fear of what my hun might do to himself or somebody else. I confiscated his phone so he couldn’t drunk dial anyone and say things he shouldn’t. He spent all day Friday on the couch, not drinking, but not saying much either, and then finally he said, “Maybe we should go back to Georgia.” As soon as the words were out of his mouth, I knew it was the right thing to do. I immediately said, “Yes, let’s go! It’ll be a lot cheaper to live there. We won’t use as much propane and it’s cheaper to buy. I can get back to doing my couponing thing and slash our grocery bills. All the shops won’t be so far away to drive to so we’ll save on fuel and fuel is probably cheaper there to begin with. Our electric will be included in our rent, so we’ll save money there too …” and I went on and on, the practical reasons to leave seemed overwhelming.

Oh but the emotional reasons to stay were very strong too. God, I was so looking forward to having a “real” Christmas with lights and a tree and a big dinner with friends who are like family. Everyone tried to convince us to stay but we had made up our mind to go and I knew it was the right thing to do. So Sunday afternoon about 1pm we pulled out of Rainbow Acres and drove back to dumpy Riverside Estates in Covington, Georgia. We got in around 11:30pm, too late to bother to set up camp properly, so we just pulled into a pull-through site and slept. The temperature in the camper was in the low 40’s F, about 10 celsius maybe. We ran the electric heater and propane furnace but it never really warmed up until the next afternoon, so we ended up sleeping fully clothed, huddling together for warmth. I didn’t get much rest.

We got up early Monday morning and moved into a spot beside the Old Man, where Bill had been when we left for VA but he left soon after us and moved to Kentucky. Not much has changed here at all. Mostly the same people around, and a few new oddballs, one new sex offender pedophile living across the way. Grammie and the Old Man were really glad to see us though. And us them. It’s good to have good friends here, even as I miss Suzie, Deb, Dana, Tommy & Irene everyday. Maybe we’ll get back to Rainbow Acres one day. I hope so.

Since Monday I’ve finished Jay’s resume and sent it out to a couple of places. It’s a bad time of year to be job hunting, we probably won’t get any nibbles until after the holidays. We have a little bit of savings to live off, and we’re already noticing savings in the cost of living since we got here. So we’ll be okay for a bit. This means we won’t have any kind of Christmas this year, even less than the one last year, but that’s okay. And all immigration procedures are at a standstill. We can’t go to Vegas in the New Year in order for me to meet his folks like we planned. We might not be able to get back to NB in the summer as planned. He can’t get his teeth fixed like we were going to do … and wouldn’t you know he’s got one that’s started bothering him. I might end up pulling a Grandad Coughlan and helping him out of his agony by way of a set of pliers. Our whole life just turned right upside down for now. He has a definite job opportunity in Nebraska, but it won’t start until late February or March, depending on the weather there and how long their winter lasts. I don’t know for sure that we can hold out that long without an income. His truck payment is almost $900/month. There are big insurance payments etc. coming due in the New Year. We’re cutting corners every way we can, but it’s gonna get mighty tight if we have to hold out til Nebraska. I’ve lived like this before, but my husband has never had to, he’s always been employed, never collected one unemployment cheque or welfare or food stamps or anything. He is struggling to deal with this change for sure. I may have to confiscate his bank and credit cards cuz he’s used to being able to buy whatever he wants when he wants it, and he’s got this attitude that he’s worked hard all his life and he “deserves” certain luxuries as a result.

I guess it’s all too new still and it’ll take time to get into the groove. I’m trying to stay upbeat and positive and forward thinking to a bright future, but he is extremely depressed, his pride terribly wounded, his faith and trust in people ripped to shreds. I need to be positive enough for both of us. I’m trying. I really am.

Anyway, that’s the latest on us. Before we left Virginia I took some final pics to share with you guys.

I will miss Iggy’s daily visits to my camper. He is a campground cat at Rainbow Acres, a pet left behind by someone who moved out and generally adopted by all the regulars. Every night he goes to Rose’s and she lets him in to sleep, but during the day he makes his rounds. He’d generally pop by my place around supper time when I’d be cooking bacon for caesar salads. I’d let him in for a few minutes to get a treat. From the size of him I think everyone was feeding him. I’m not much of a cat person, as you all know, but Iggy liked to cuddle and never hissed or scratched, so we were friends. 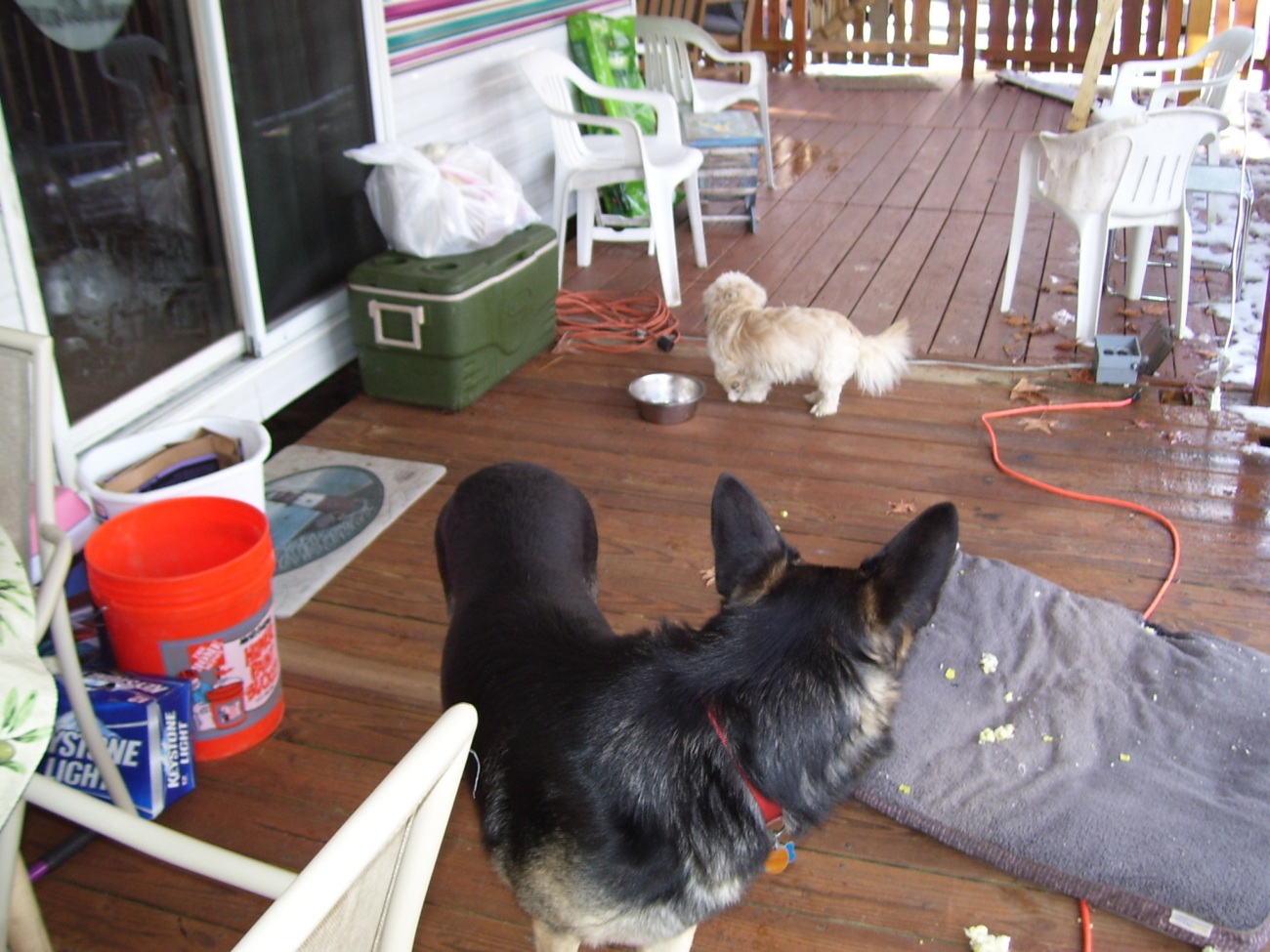 Kojak x2 and that's Cheyanne in the background.

Dana & Deb have three dogs and these are two of them. All of them are lovable beasts, great pets, I’d have kidnapped anyone of them and brought them with me. Kojak is the youngest, still very puppy like even though he’s a pretty big German Shepherd.

Deb & Dana's firepit where we spent many a good night with great friends.

We actually got a little bit of snow in Virginia and because it was so cold, it stayed on the ground and didn’t melt.

Jay hooking up to the camper while Joey looks on.

I was standing on Deb & Dana’s front deck when I snapped this shot. It was a difficult sad day overall. Deb made breakfast for all of us that last morning and Susie made mimosas to go with. Everything was scrum. 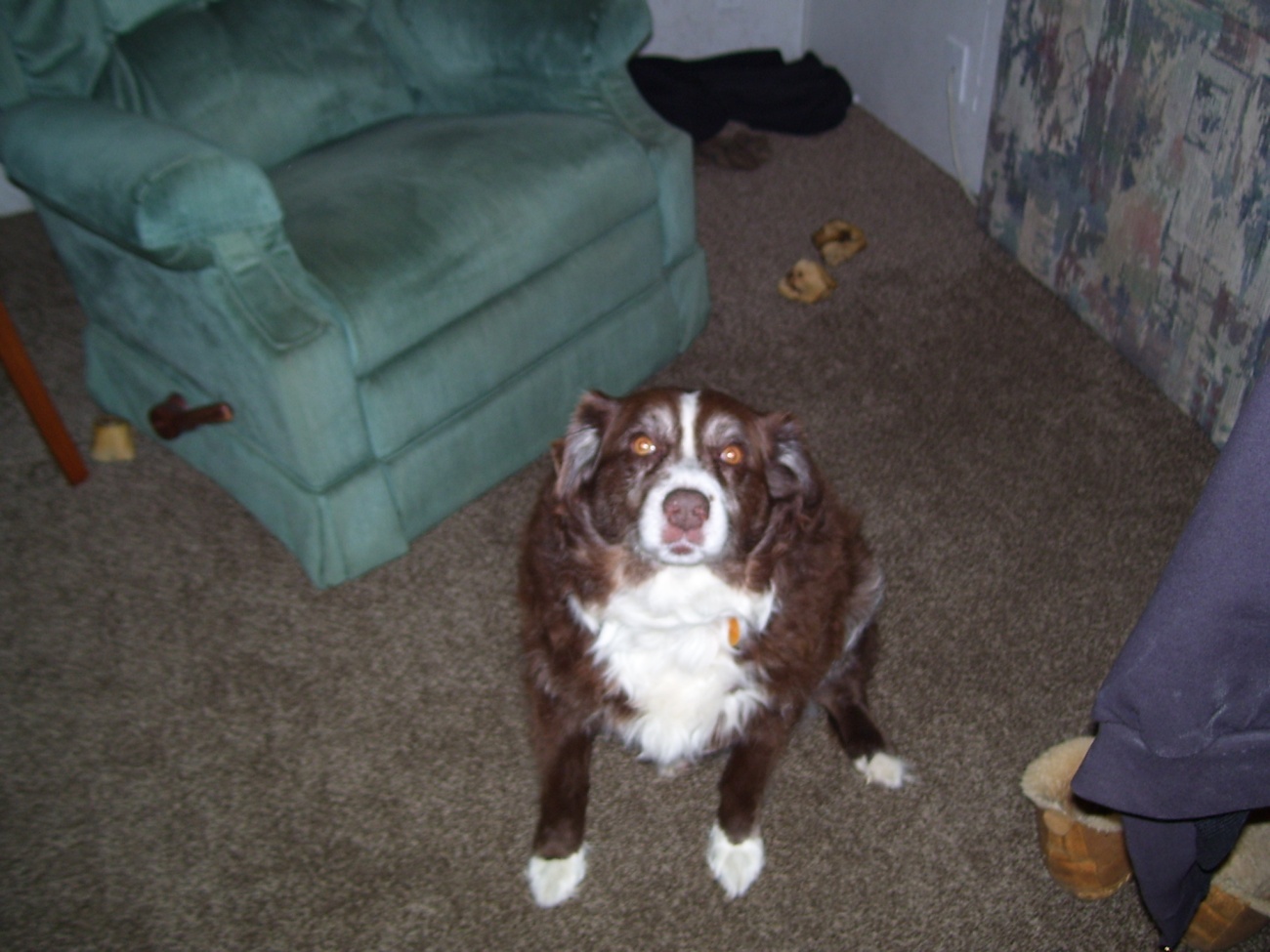 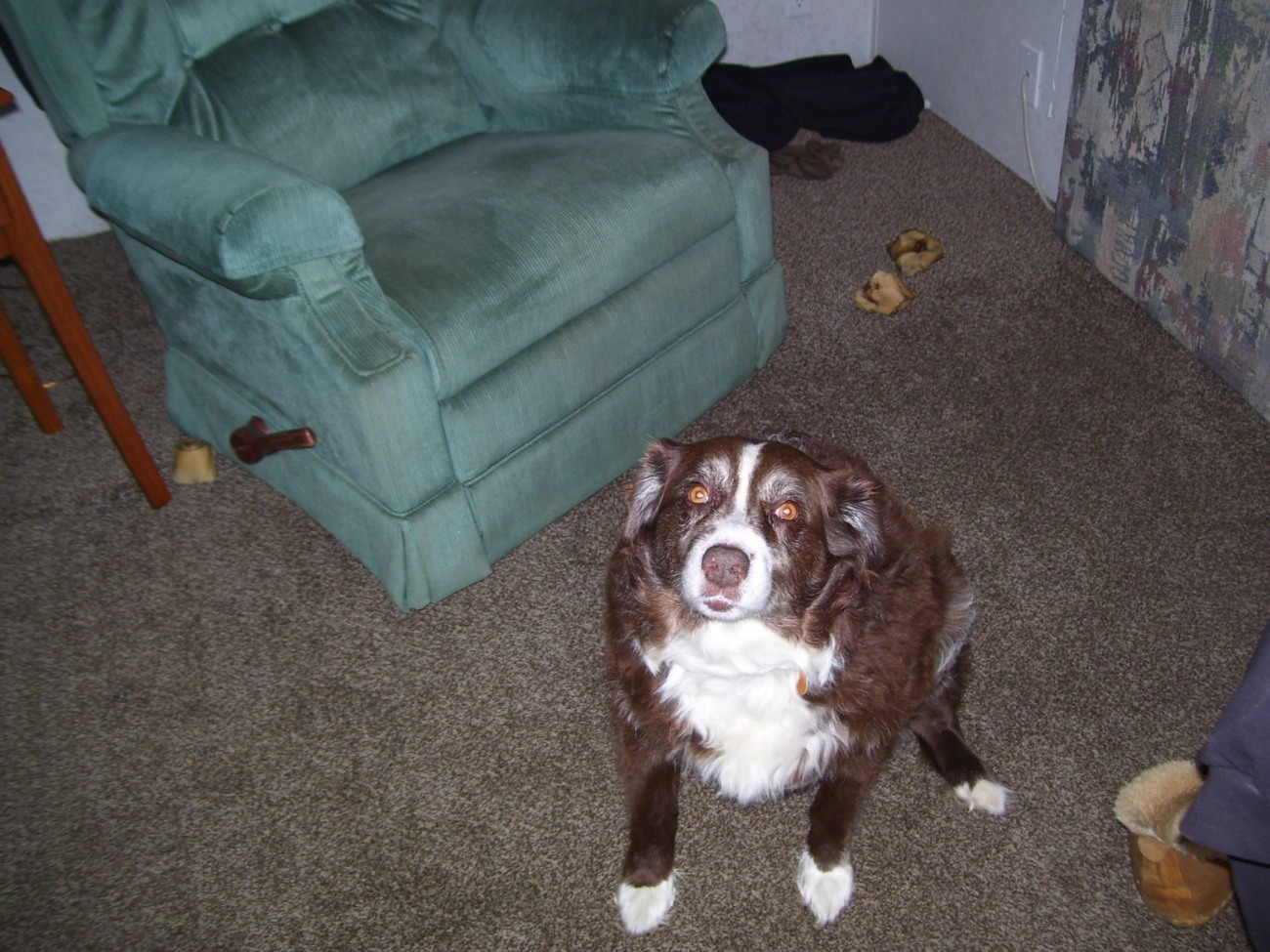 Deb & Dana’s third dog, not sure how to spell her name properly. She was my favourite out of all the dogs in the park. She would sit and let you pet her and cuddle all day if you wanted, so mild mannered Deb’s grandkids could roll all over her and she would let them. I’ll miss her most of all. 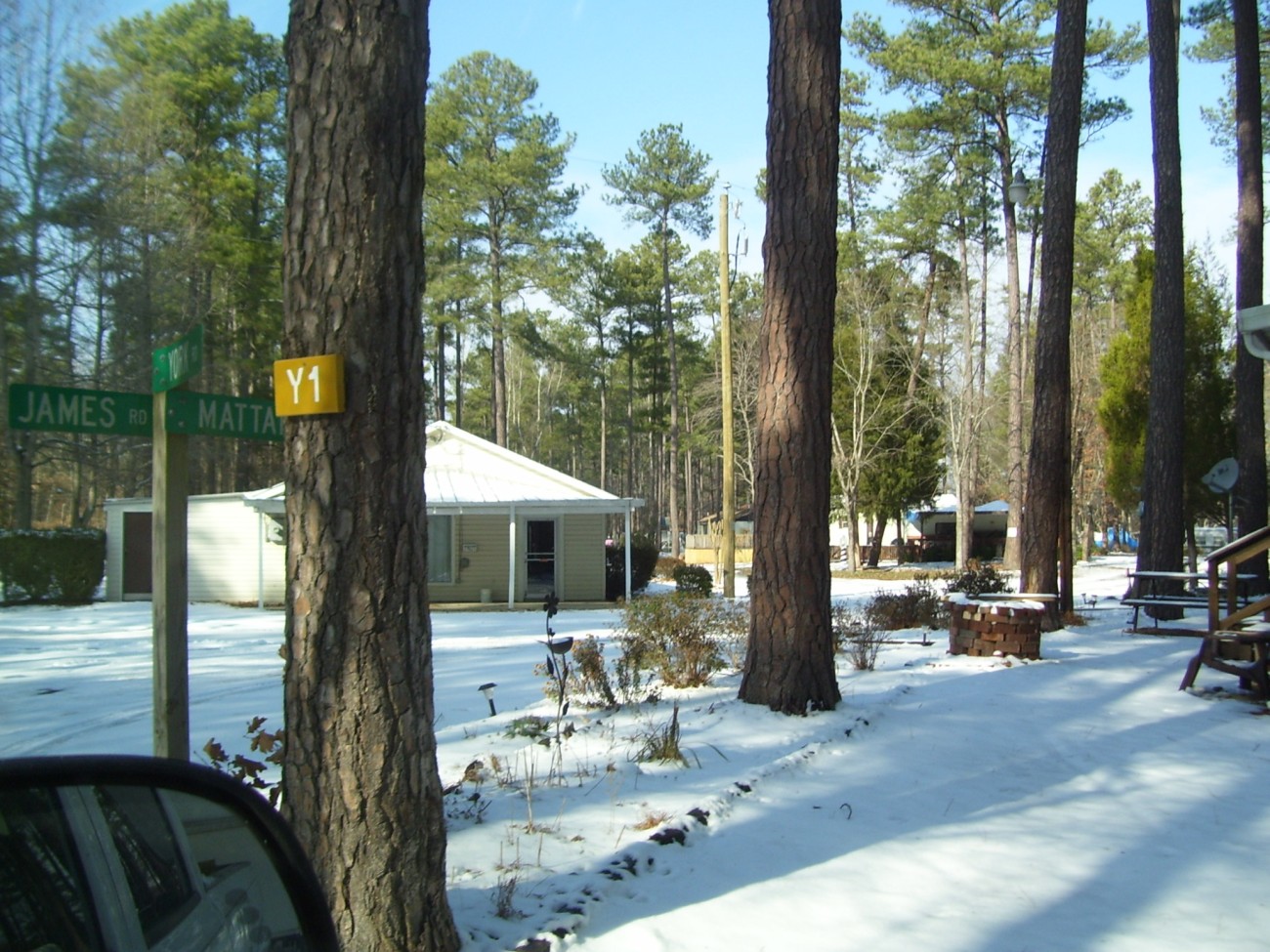 Driving out York Street one last time looking toward the rec hall.

Driving past the rec hall

The camper right beside the rec hall is where young Corey and his mom live. I didn’t get to say goodbye to him. 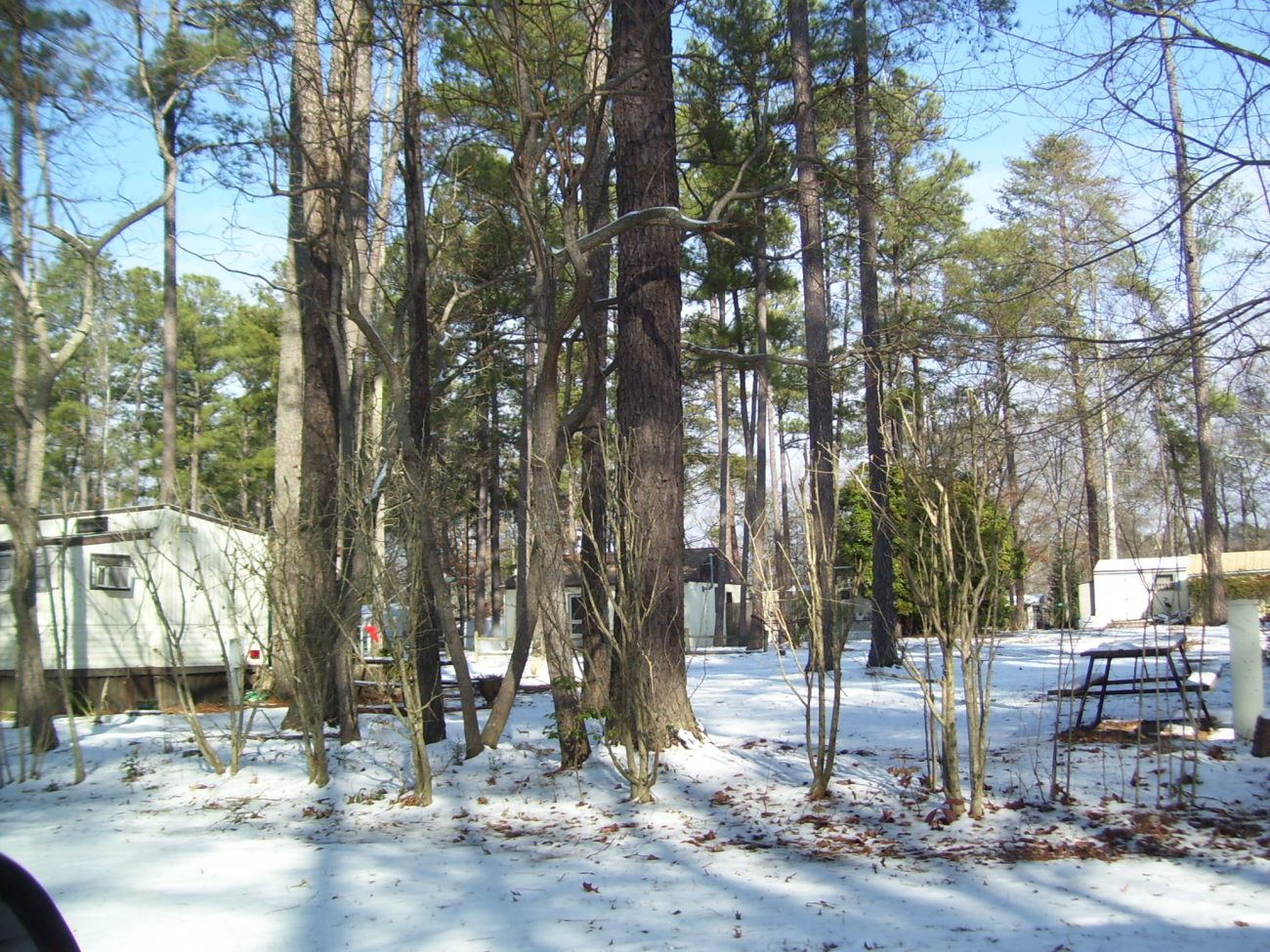 Driving past the laundry room

It’s that little building in behind those big trees. One of the cleanest (most expensive) laundry rooms I’ve used. 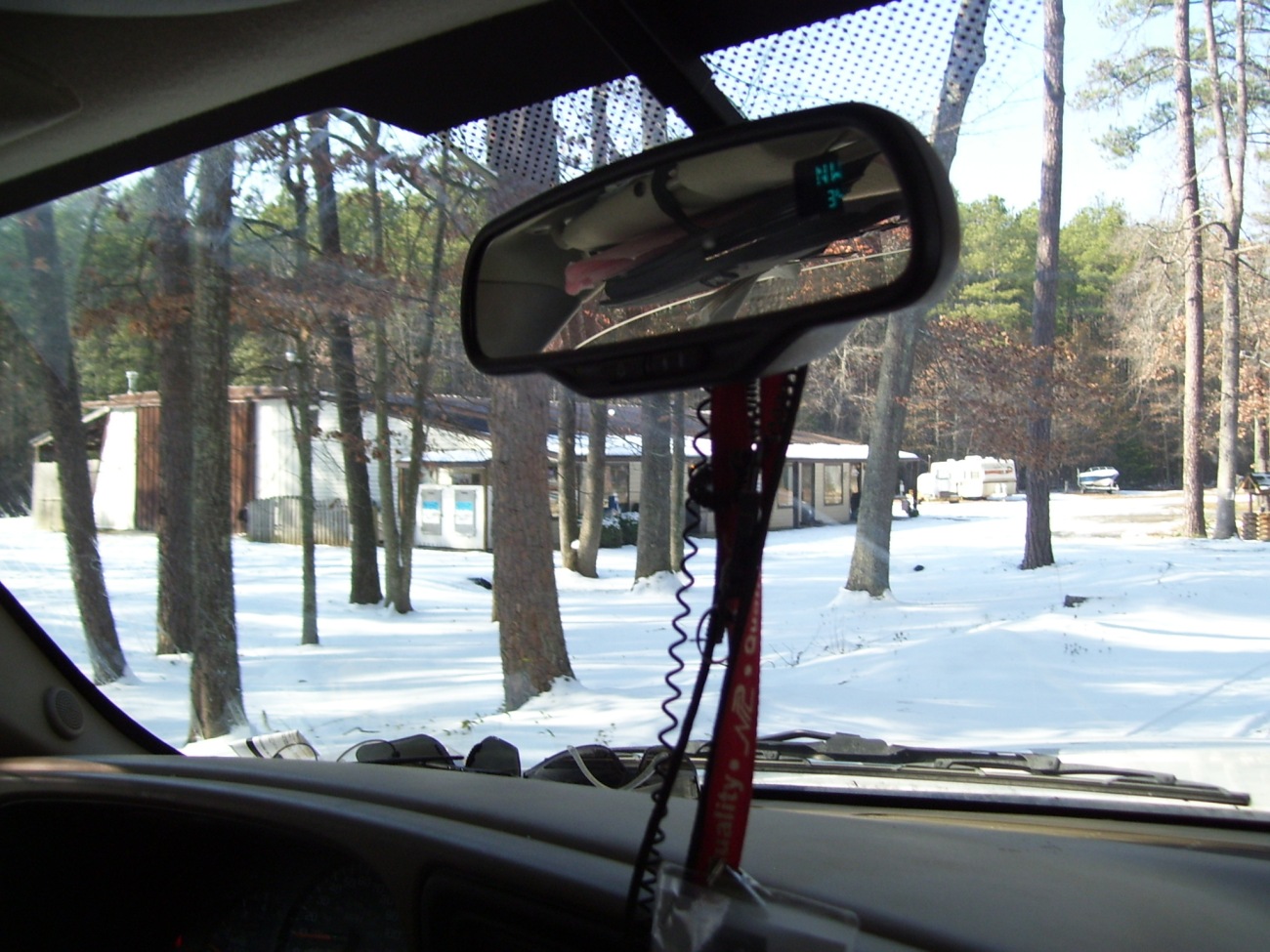 Coming up on the store/ office