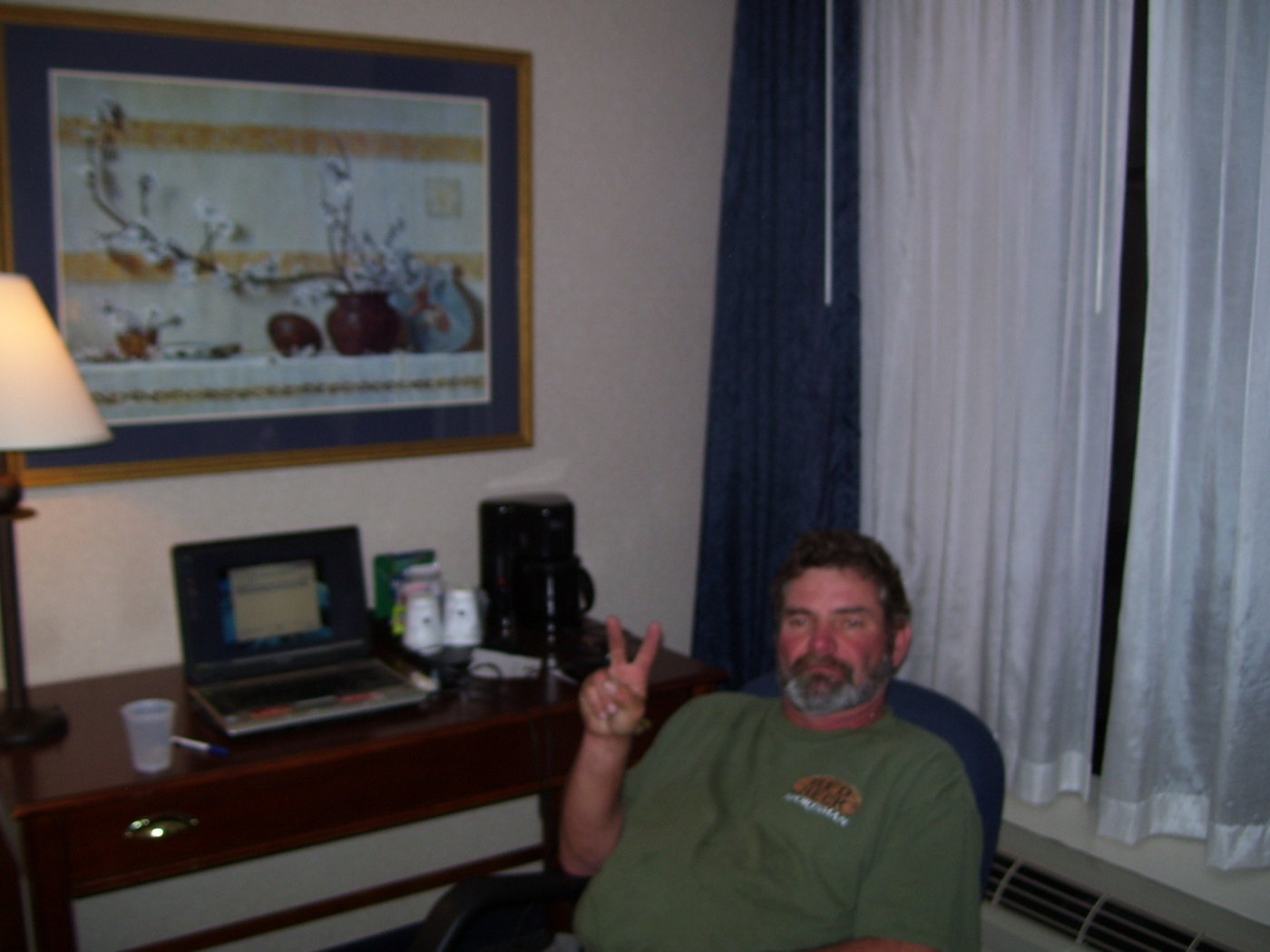 My husband has been working a lot. I’m talking seven days a week, 12-14 hours a day, with a 30-45 minute commute each way to the job site. We haven’t been able to spend much time together since coming to Virginia, so earlier this week Jay took a few days vacation.

We didn’t really have an itinerary or agenda. We didn’t pre-book hotel rooms. I found some touristy and shopping type information online, printed a couple of maps and we borrowed our neighbor’s GPS. Monday morning I was dealing with some last minute magazine changes that needed my immediate attention. Jay did laundry and fixed some things at Miss Susie’s camper that he had promised her he’d fix on his next day off (months ago!). Then I wrote some letters for Susie that I promised her I’d help her with, packed up a small suitcase, took a quick shower and we were on the road around 3pm.

Our GPS was a man’s voice and Debbi calls him Richard, I nicknamed Dick. I thought Jay would appreciate calling him dickhead when and if he screwed us up. I also had my new road atlas by my side, just in case. We screwed Dick up right away when we veered off route 30 to go to Jay’s job site because he had to drop off some keys for Joey. But he got back with the program and was actually quite helpful in our three-day adventure north.

I had discovered that VA’s largest outlet mall was located about an hour outside of Washington, DC, so I gave Dick the co-ordinates for Woodbridge. Our loose plan was to head there, find a hotel, get a bite to eat and then hit the mall to see about getting me some fall/winter clothing. I am in desperate need of warmth! My limited all-season wardrobe just isn’t going to cut it during a frigid Virginia winter like it did last year in Georgia.

After we left the job site we continued on into Mechanicsville and stopped by the boys hotel to check on John because he’d had an accident on the job earlier that morning. I’m not quite sure what happened (but the same thing had happened to another operator just the day before) but somehow his safety vest got caught on something and the result was the machine whipping round and round with John hanging off the side and being flung around beating his body off the side of the machine. He could have been really hurt. Hell, if nobody had noticed what was going on and saved him, he probably would have been killed. As it was we arrived at the hotel and found a very sore, battered and bruised John sitting with his feet up and drinking beer. I gave him my purse stash of Ibuprofen because I’d packed the whole bottle in the suitcase in case I needed it. We didn’t stay long because he seemed in a lot of pain and not very talkative, but otherwise no worse for wear. Then we hit the highway.

Because of all our stops and having taken a longer route than necessary, we didn’t get to Woodbridge until early evening. We found a Best Western right away and checked in. Jay was a little upset they were a non-smoking facility so he couldn’t get a smoking room and would have to go outside in the cold, but I didn’t mind that one little bit! 🙂

Room 719 was a King Suite located at the end of the hall, stretching across one whole end of the building, so I’m sure it was laid off differently than the rest of the rooms on the floor. We both really liked the lay-out and here are the room pictures for my sisters, who always want to see hotel rooms 🙂

As soon as you went in the room there was the office part of the room with a desk, chair, heater/air, and window. 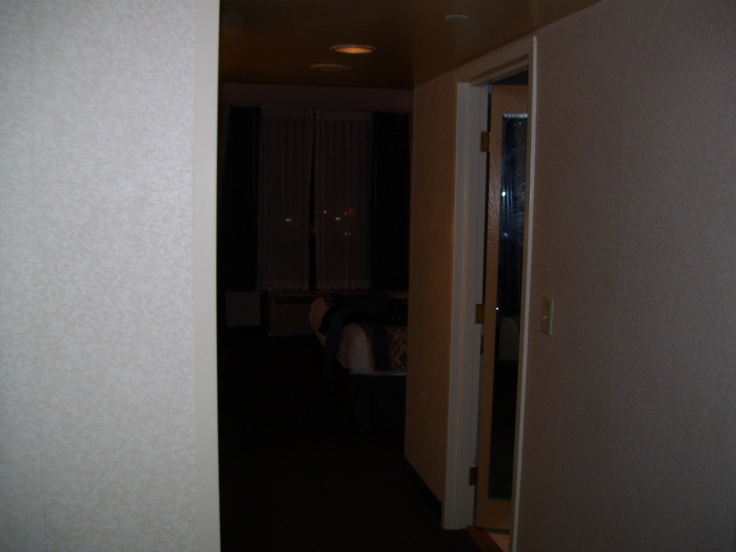 Hallway leading from front office area back to bedroom. 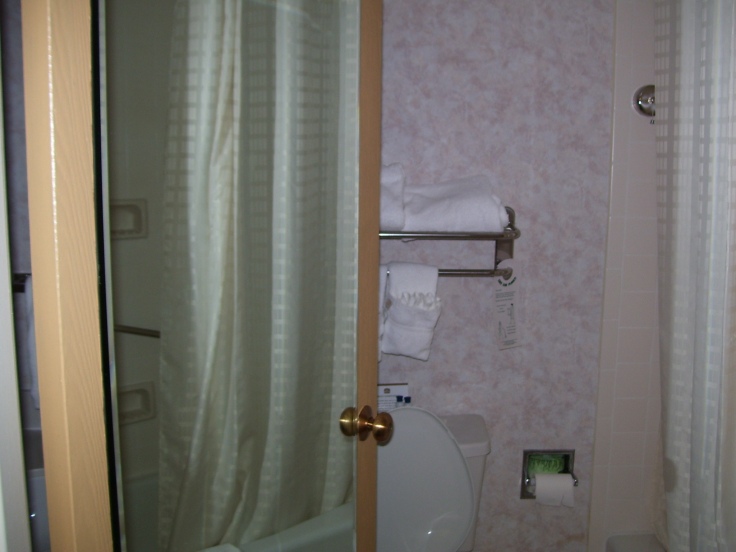 Bathroom to the right in the hall. It was smallish but complete with sink, toilet, full bath, etc. 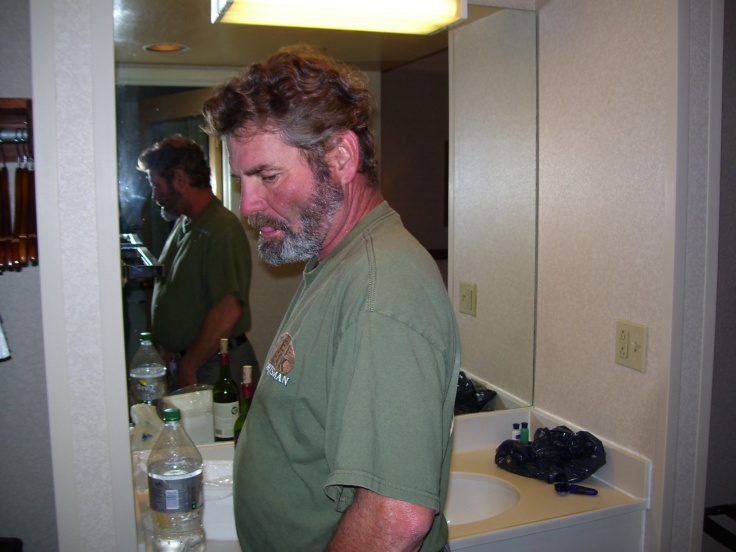 Closet & kitchenette type sink to the left in the hall. 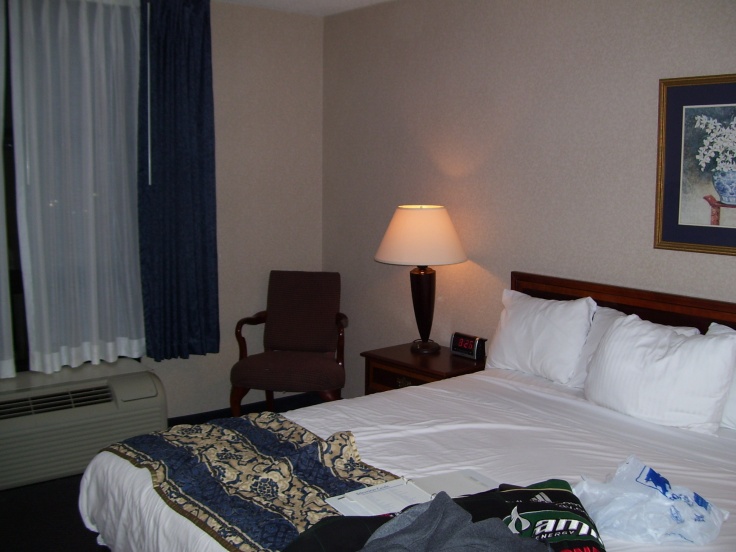 King bed that was ever so comfy! 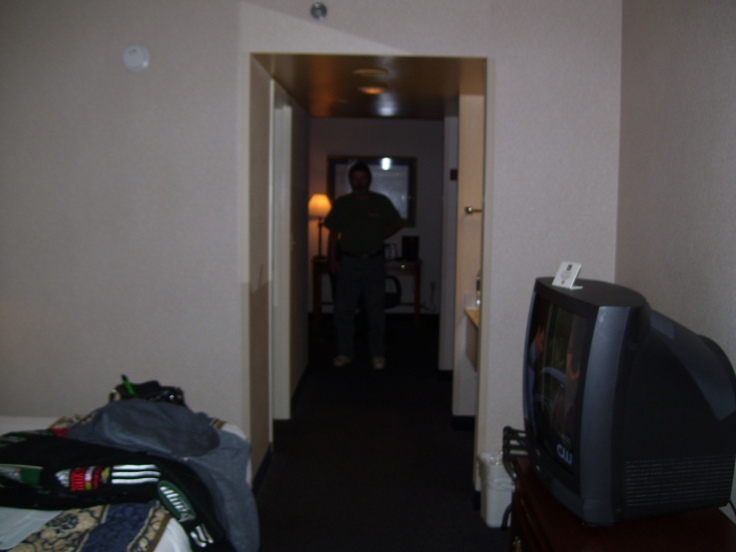 Jay down the hall. 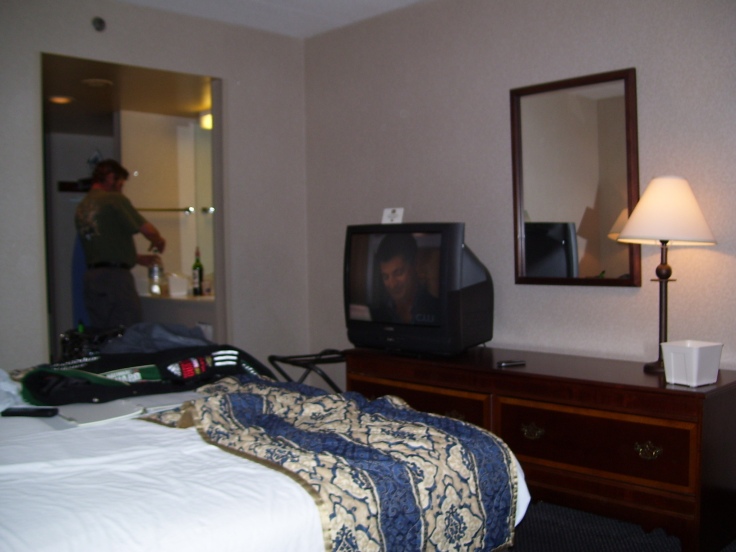 Jay fixing a cocktail & the tv. 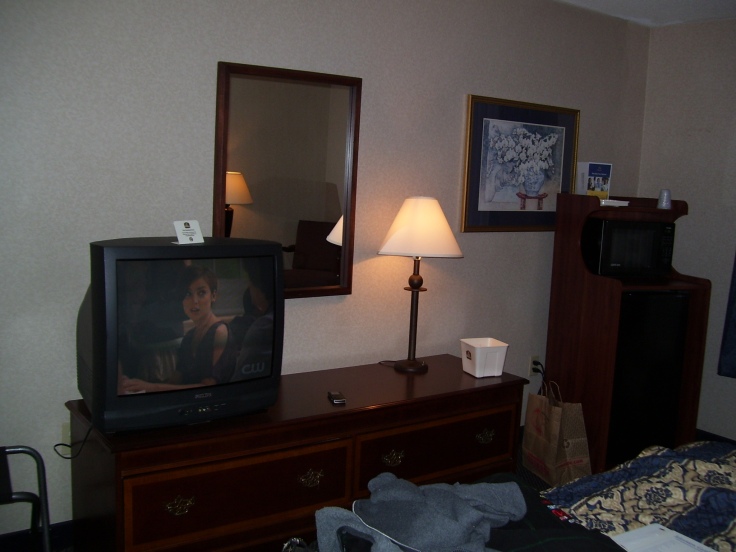 The hotel was right across the street from The Outback steakhouse, so we decided to just walk over there and have dinner. As usual we ordered a blooming onion appetizer to start (which is nearly always a mistake because then we eat too much of it and have no room for our dinner, but we were starving). I ordered the house Cabernet Sauvignon but the waitress was new and young and not at all educated about wines so when she came back with Jay’s cocktail and a glass of white wine I was like, oh no, I wanted red wine, the cabernet … She looked uber confused and said cabernets were always white. I was like, no honey, chardonnays are always white but cabernets are red. So she went back to the bar and then the bartender came over with his apologies and two sample cabernets for me to try. One was the Francis Ford Coppola, which I have always wanted to try but never wanted to pay $10 a glass for, so I was stoked! So stoked that I didn’t catch the name of the other one. I tried the Coppola first. It was fabulous! It was by far the driest wine I’ve ever tasted in my life! One sip sucked every bit of moisture out of my mouth. I couldn’t believe it. But the other one … MAN! The other one was fan-freaking-tastic!! It was just perfect! Dry, but light and so full bodied. OMG! I nearly had an orgasm at the table! I’m not kidding. I would have ordered a glass but the waitress didn’t know which one it was and I didn’t know which one it was and rather than run the risk of paying a lot of dough for a wine that wasn’t the right one, I just got the house stuff. It was really good too, but not the best damn wine I’ve ever had either.

Jay ordered his usual prime rib with garlic mashed potatoes and a side lobster tail. I tried the Alice Springs Chicken, which was really good too. And after having sucked back the whole blooming onion before our entrees arrived, needless to say we had a little doggie bag to take back to our room with us.

We had brought the laptop with us so Jay could still do paperwork every night while we were away. He didn’t want Stan to do it for him because at the end of the day even though he hadn’t been there any mistakes would come back on him. During dinner Stan called to give Jay the guys hours, what items they had used and what had gotten done that day. So when we went back to the room, Jay started doing the paperwork. By this time it was going on 9pm and I didn’t figure it was worth it to go to the mall for just an hour or so before they closed, so I just curled up and watched some tv. We were in bed asleep by 10:30 and didn’t kick until 12 hours later. My hun really needed the rest. It’s been a hard schedule to maintain, getting home every night around 8, eating dinner anytime after 10pm, and having to get up for work by 5am. So I was glad he finally got a good night’s sleep. Jeeze, we could’ve just stayed in that bed the whole time away and I think we both would have called it a really good trip.

I got up first and showered then went down to the lunch room to get some coffee while Jay showered. We’d missed the breakfast buffet that was included free with our room, but it didn’t matter really, we were both kinda still full of Outback the night before.

Then we packed up and checked out and were off to find the mall. Richard (aka Dick) was not so helpful in this department because I didn’t have a street address, but luckily I had printed off a map of the local area around the mall. A block over from our hotel there were a whole lot of cop cars, news crews, and helicopters circling overhead in front of some sort of military recruitment agency that was roped off with yellow crime scene tape. We wondered what had happened so close to where we had laid our heads for the night. Jay figured it must have been serious based on all the activity, possibly someone had gone postal. But we didn’t have a whole lot of time to think about it because we were going shopping!

I wasn’t really in the mood to shop Tuesday morning. I mean it seemed like a good idea Monday afternoon, but after we walked around a bit and went into a few stores I knew I wasn’t going to try anything on, and if I didn’t try anything on then I couldn’t buy anything, so I just looked at Jay and said, “Meh, let’s not do this today.” He was surprised (he’s always surprised that I really don’t like to shop) but agreeable because his back had been hurting since Sunday and threatening to give out altogether, so walking around the mall was kinda painful.

The only real thing I had on my agenda, and would have been terribly disappointed if we didn’t do it, was visiting Arlington National Cemetery to see JFK’s grave. I punched the zip code into Richard and we were off! There is no street number for the cemetery though, so as we got close we had to rely on road signs and some directions I had printed off on the computer. Thank goodness I had taken the time to print them! Cuz I think we might have went round that traffic circle a few times before we got in.

I don’t get excited or overwhelmed by too many things in general, but entering through those big stone gates that I’d seen on tv so many times, I was absolutely a little overwhelmed with emotion. I would have loved to have taken a picture of the gates but unfortunately I had to be reading the directions to make sure we were on track. Jay had never been there before either, but he didn’t seem all that interested or to feel the same kind of connection I did. He was raised Democrat, and his mama was a JFK fan, but I dunno … it didn’t feel like he was “getting” it like I was. Maybe his back was just aching too much and he was too traffic stressed to appreciate it all.

When you drive in two guards in dress uniform direct you to the parking garage, there are rows of white crosses on either side of the road stretching far off into the distance. We parked the truck and walked into the Visitor Center so I could pick up a map to find the Kennedy burial site. The place is freaking huge and you could easily walk around there for days if you didn’t have some kind of plan and map. It’s all uphill too, so it was quite the vigorous trek up to where we needed to be.